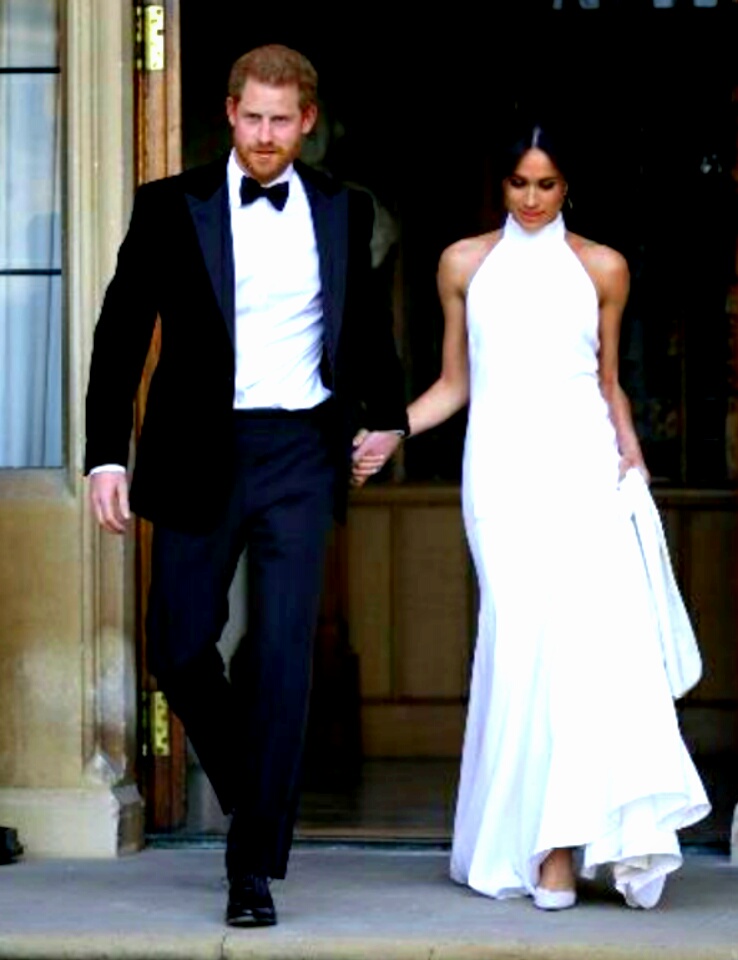 Where were the fucking jewels? The earrings, necklaces, bandeaus, cuffs, chandeliers, girandoles, lattices, and bibs that drip from every Mountbatten-Windsor bone and appendage on a state occasion?  Am I the only one who couldn’t stomach the complete absence of stomachers?

This paucity of precious and semi-precious stones has me questioning the validity of the Monarchy. How are we to recognize who is truly royal without these emblems? There wasn’t even a single piece from the Queen’s exclusive collection of the Precious! Get Me Some Chicken! line of costume jewelry.

Meghan’s ascetic simplicity was striking. She could have been equally at home taking vows of poverty in a nunnery. Granted, it would be in a small Order whose only other member is Audrey Hepburn. Sister Luke meets Sister Duke.

(A brief aside on my previously stated love for Miss Hepburn. To further support claims of her greatness, I offer up a clip I recently found of her presenting an Oscar to Rex Harrison.

The substance of what she does is not deep. It’s actually kind of childish. Easily mimiced, in others it comes across as contrived. In her it seems authentic. If she is not being genuine, she’s a much better actress than she’s ever been credited for. I find her every move mesmerizing.)

The lack of serious gems coupled with other changes like allowing divorce in the family make it seem like the British Monarchy is moving at bullet speed out of the 19th Century. I can’t stand the pace, I feel so left out. It makes me question my very existence.

The low point of the Wedding had to be the minister’s sermon. Although we’re never supposed to admit embarrassment at being American, Old Glory, pass the ammunition and all of that, his cheap theatrics belonged on a used car lot. Not in a serious discussion on the purpose of life.

His huckster antics are endemic to all US religions. Why aren’t these pompous fools exposed for the frauds they are? I was onto them by the age of 10. Their schtick became my schtick earning me high approval ratings with my audience (my family.) It was with great dismay that I later learned people do take these clowns seriously.

The other misstep of the nuptials was the failure to record the Duchess of Sussex’s initial curtsy to the Queen. Apparently the single camera in the Chapel went wide-angle from the ceiling just at the moment Meghan took a simulated knee. We may never truly know her symbolic worthiness.

Had it been me there, the gesture would have been so severe no one could ever question my conviction. I would have pancaked out a la Audrey in front of Her Majesty leaving no doubts about my obeisance to the crown.

In a way I felt like I was there. The image of the day was of the Page Boy who had so much fun with his twin brother dutifully collecting Meghan’s train as she ascended the West Stairs. When they reached the top and took their first steps into the nave, trumpets blared the opening notes of the fanfare. The child was consumed with such ecstasy at the sound he could barely contain himself.

If that kid doesn’t turn out to be a queen my days on earth deserve to be numbered.  It would mean my personal gaydar is so out of whack I no longer have the necessary tools it takes for longterm survival in modern life.

I’ve been without cable now for three years, YouTube has replaced the boob tube. It may be the same thing, but viewing without commercials makes it feel purer.

Some nights I’ll fall asleep with it on and wake up deep in a cookie vortex. Because you liked that we thought you’d like this. The strangest clips appear. It’s how I got caught up in the 20th anniversary of Diana’s death.

I do believe she was murdered but don’t have the resources to prove it. It’s just too convenient for her ex-husband and mother-in-law not to be true. What’s baffling though is how her two boys seem so loving towards the two beneficiaries.

Maybe William and Harry’s sense of abandonment left them clutching to whatever remained. They will get to the bottom of things over time and the truth will emerge. And if they know already, their poker faced mastery of public images is remarkable at their age.

Which was the rap against their Mother. The Mountbatten-Windsors said she was a nut job in real life who completely fooled the public with her manipulation of the media. That’s the kettle calling the pot semi-precious.

It’s left to YouTube viewers to read between the lines and determine who is more genuine: Betty and her kids or the Candle in the Wind. The latter appears to be the clear winner.

In the video coming down the water slide with her sons, Diana erupts into a hearty, sustained laugh that’s difficult to fake. It was probably at the expense of a thoroughly drenched photographer. There’s another one where she’s entering a state dinner, turns to the cameras and gives her coif a cheeky “I’m hot stuff” fluff.  She is one of us. The People’s Princess.

Contrast that to sister-in-law Anne, The Horses’ Princess. She shares an equine love with her Mother that had her competing on an Olympian’s level. Since then she’s been hell-bent on galloping into the Guiness Record Book for the most personal appearances by a Saxe-Coburg-Gotha.

The Princess Royal is seen motorcading and helicoptering from one 20 minute visit to the next. Her stiff upper lip and matronly-before-her-time looks make her appear otherworldly. In one segment  a teenager remarks, “her hair isn’t connected to her, it doesn’t move.”

Whereas Diana took on causes for AIDS and eradicating land mines, Anne unveils plaques for the Shetland Pony Breeders Association. Or she celebrates the achievements of the Afghan Crocheters Guild of Southeastern Northumberland. Her dispassionate demeanor suggests the lower lips may be as rigid as the upper one.

Like his sister who just phones it in, the Tampax’s Prince is also a member of the Ma Bell generation. He paid his dues by getting caught doing naughty phone sex in 1992.

The phenomenon of phone dating services began in the 80’s. You would dial in to be randomly matched with another caller then could either have a private chat about things or make plans to meet up. More often than not the Al Parker voice you chatted with would turn out to be a 400 pound, pimply mama’s boy living in a debris strewn trailer with 19 cats. Sometimes it’s better to leave fantasy alone and just rub one out on the line.

The Heir Apparent got the phone sex spirit and was recorded cooing “I wanna be your tampax“ to his baby-poo. He deserves credit for getting the body region correct even if image selection was woeful.

The object of his hygienic lust was his current spouse. Born Camilla Shat, she is the great-granddaughter of Alice Keppel who was a mistress to Edward VII. The day Tampax the First is anointed our undoubted King he will sit on St. Edward’s Chair and ponder his holy bloodlines. He should contemplate his and his wife’s adulterous ones as well.

Their affair began innocently enough when they were young and unattached. Charles ensured she wasn’t a virgin (if there was any doubt) making her an unacceptable bride. Good PR work could have smoothed that over but Chuck was indecisive and she got tired of waiting. She mounted his hottest regimental brother in the Royal Horse Guards and became Camilla Parkyer-Bowels.

Charles spent the 70s flitting from woman to woman and having a blast. As a bonus he was able to work Lady Parkyer-Bowels back into the rotation.

When footage surfaced of him shaking his crazy legged groove thing at Carnivale in Rio, Burke’s Peerage convulsed en masse with embarrassment.  The establishment scrambled to create a homebody image for Mr. Wales by getting him married. The entire aristocracy seemed to be in on it except for the 20 year old naif who would be the victim.

The cruelest and most callous aspect of the plot was how Diana was used as a pawn in their game. Without her knowledge and with no training or assistance. That she was brilliant enough to catch on quickly and turn the tables on the Monarchy ended up costing her life.

Four months after her death, Charles’ other main extramarital squeeze, Kanga, died after a bizarre series of illnesses. The path was cleared for Camilla. A half decade cooling off period ensued and in 2005 the Queen finally sanctioned their union. Little Miss Shat was legitimized as the Duchess of Cornholes.

When the current sovereign was informed of her father’s death in 1952, a courtier immediately asked how she was to be styled. She responded with an incredulous, “why Elizabeth, of course.”

It’s a little known fact that god’s representatives on earth can call themselves anything they want once on the throne. When that day comes, King Tampax will no doubt stick with the unoriginal “Charles.”

The earth-shattering moment comes when his savvy queen consort is asked. It will be the final step in her long makeover to become beloved. Since today’s dumbed-down monarchy is fueled by a tabloid press who can’t get wacky enough for you, Camilla will go for broke and answer, “Queen Diana.”

Before leaving Fort Wayne this morning I visited one of my storage units. It gives me such comfort to behold my things. I drove up to Chicago, turned the car in and walked 10 freezing blocks to my hotel.

I’m at the Chicago Hilton on South Michigan, the final leg in my winter weekend hotel bargain tour. It was here that Queen Elizabeth II attended a dinner in her honor in 1959 on her visit commemorating the opening of the St. Lawrence Seaway.

In 1968, the hotel was the backdrop for television images of police beating up anti-war demonstrators during the Democratic Convention. They were across the street in Grant Park.

Tonight it houses one of the nation’s most notorious Ellis Act victims.

What can a poor boy do.