Avid readers of this blog will remember my Jackie collection and my angst over what to do with all the ephemera I’ve amassed. A friend has stepped up to help me auction off some of the higher end items. The cornerstone of that part of the collection is a note she wrote to Halston.

Ben and Rags were part of the 70’s Polk Street/Chicken Little’s/Matinee social scene until they moved to New York around 1977. Ben went to work for Andy Warhol. Rags did something too, though I can’t remember exactly what other than laughing a lot and having a good time.

Rags and Ben were close with Halston and his partner Victor Hugo. They partied with them at their Lenox Hill home and vacationed with them out in Montauk. When Victor gave him the Jackie note, Rags immediately thought of my collection. The next time he was in San Francisco he presented it to me.

Jackie’s note writing was mentioned by Senator Kennedy when he eulogized her. “At the end, she worried more about us than herself. She let her family and friends know she was thinking of them. How cherished were those wonderful notes in her distinctive hand on her powder blue stationary.”

We’ll find out just how cherished when the hammer comes down at Bonhams. 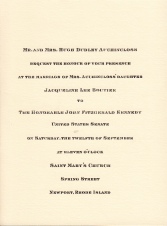 The place setting menu for the State Dinner where Pablo Casals played. He’d previously performed at the White House in 1904 but vowed never again after the US recognized the Franco regime. Jackie coaxed him back. There’s a coffee stain on the back which leads me to believe this was Ethel’s.

In his diaries, Warhol mentions being at one of Jackie’s annual Christmas parties and how Warren Beatty cornered her to whisper raunchy nothings into her ear. Jackie dismissed him with a cool, “Oh Warren.” 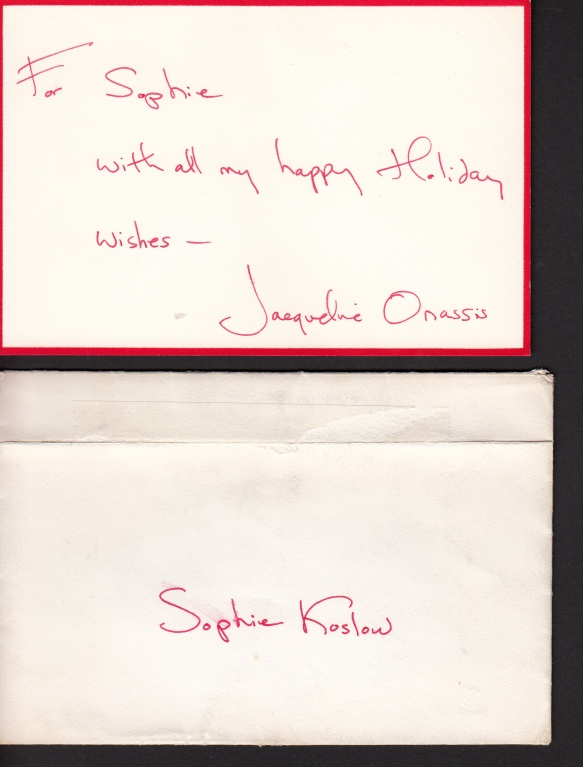 Herb Caen ran a piece on Mrs. O being unhappy with her manicurist selling her Christmas note to a Manhattan book shop. The next time I was in New York I visited the store and, amazingly, it was still available.