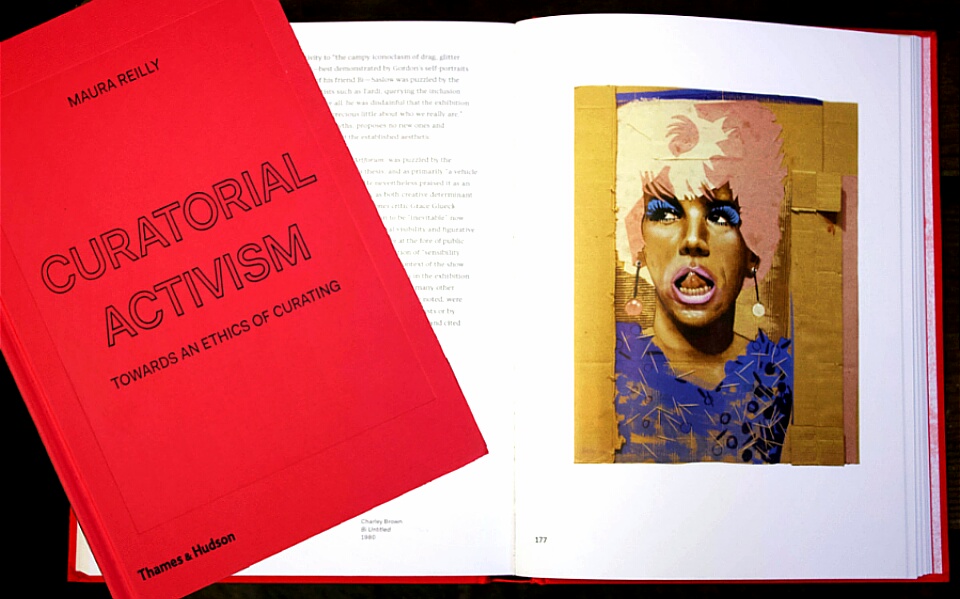 Back in the disco days when we encountered a person of undecipherable gender, we would turn to each other and ask “bua uuh guul?” The phrase became part of our vocabulary when someone overheard a pimp on the sidewalk approach a potential customer and offer him his choice of gender in a playmate. Not only was the john’s predilection unclear, what was available was pretty murky too.

Gender confusion and challenging sex role stereotypes has always been a preoccupation of mine. As documented in a recently published book, Curatorial Activism: Towards an Ethics of Curating.

When I first saw the words “ethics” and “curators” together I thought “not another rehash of the frolicking I did back in 1973.” Those allegations involving The Detroit Institute of Art staff have been laid to rest years ago.

Then I realized it was referring to the Extended Sensibilities: Homosexual Presence in Contemporary Art show held in Manhattan in 1982. My friend Charley Brown did a series of paintings of me in the early 80’s, a couple of which were in that New Museum show.

The portrait included in the book is one of my favorites because of Charley’s use of found materials: layers of cardboard glued together, appliqued toothpicks adding dimension to Brian’s sequined top. There’s gutter in that glamour.

The timing of that show coincided with my waning interest in drag. The derring-do and shock of what I’d done before was no longer there and my falling out with Jim had left me without focus. Plus, RuPaul was on the ascendant and about to change the drag landscape completely. I like to think I helped make the world safe for Ru. Then I think what a miserable failure I’ve been. No one’s safe from that bitch.

On my trip to Indiana this month I reunited with Susan in Bloomington who I hadn’t seen in over 40 years. One of the things we reminisced about was the evening she gave me makeup lessons. As we listened to Ike & Tina records in her apartment that night, she went over the basics of eye makeup. And told me my practice of the art was particularly abysmal.

On our recent visit I tried to convince her that precision wasn’t nearly as important back in those days as how I presented myself. She would have none of it. She chided that anything worth doing was worth doing well. Then, out of the blue, she asked whether I identified as a woman or a man.

The question is an obvious one and the way the discussion seems to be framed these days. But it caught me completely off guard. The essence of my being never entered into my thinking when I did drag. It was all about what I could get away with. And looking good while I did it.

I told Susan the only thing I’ve ever identified as was a troublemaker.