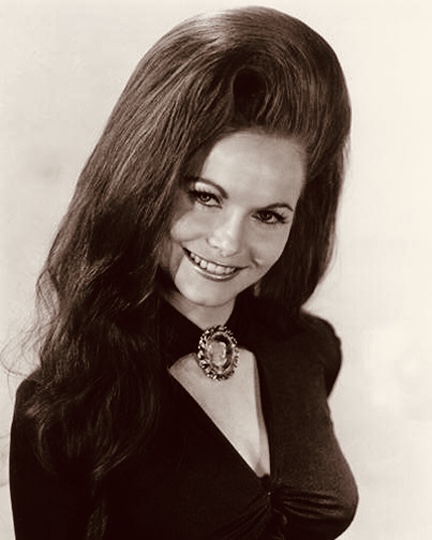 My summer sojourn on Youtube led straight into Harper Valley. Not only is there the earth shattering, mini-skirted 1968 single but I’ve discovered Riley’s attempt at a comeback in 1984. It’s called Return to Harper Valley.

The sequel doesn’t come close to the original but it has some absurd lyrics to sink your teeth into. Like how drinking took Mr. Kelly’s liver and his brain. Or the sighting of the high school kids “a takin’ off their clothes.”

There’s even more recent Jeannie C. footage from what appears to be a retirement home. She’s wearing way too many bangles, a curly bird coif and a fruity corsage. Still, she’s able to put down her buffet plate (momentarily) to unleash another rip-snorting version of her classic.

It’s basically a song with no melody. Yet her voice in the 84 version is so pseudo-melodic. The hefty tone, shimmering hillbilly vibrato and great pitch fascinate me.  And beneath every performance is her desire to do it. Again and again.

Harper Valley PTA was released in August, 1968 as I began my freshmen year in college. That fall semester I developed a huge crush on the guy in the next room, Jack. He was a swimmer with a barrel chest, tons of body hair and tinges of blonde in his curly mop from the chlorine and sun. He had a wry smile for everything.

We were cordial but kept our distance the first term until one January weekend when everyone else was out. He suggested we get some Richard’s Wild Irish Rose with his fake id. We then got plastered listening to records in my room.

I asked him about this cool samba-like song I’d heard him playing. He said it was Sympathy for the Devil from the new Stones album. He jumped up to get it then stopped in his tracks. He’d locked himself out,

The oak doors in this 1920’s dorm had veneer panels that were easily kicked in.  Which we did to unlock his door. As we sat on the linoleum hammering the molding back on. Jack rubbed my thigh and said “you know, I’m bisexual.”

I was terrified. It’s what I wanted to hear but thought it was some kind of set up. He was such a jock, anything I did he’d share with his buddies on the swim team. I’d be the laughing stock of Edmondson Hall. I pretended nothing happened as we listened to more music then passed out.

Though conjugality didn’t occur that night, a deep affection developed between us. We lived together the next two years.

The second year we moved to an off campus apartment. If anything were to happen again I felt safer away from the dorm. But he showed up that fall with a new girlfriend who lived a block away. That was the end of that.

The closest we ever came to consumating it was one Sunday evening at Edmondson. We were both hungover and cranky. I started teasing him relentlessly so he leapt out of bed, dashed across the room and jumped on top of me. His gym shorts were rubbing my face as he held me down tickling me. We both laughed until he grabbed a belt and tied me up.

It was no longer fun. There was no way out. Back on top, he lifted his shorts and rubbed his genitals in my face. He wanted me to suck his dick. I wouldn’t. He finally gave up and went back to read in bed. He left me bound up for about an hour.

I was powerless, furious and humiliated. I’d been a runt all of my life and never had the physical strength to prevail in situations like this. The only advantage I had was a brain. I laid there determined to make a name for myself to somehow exact revenge. The seeds for megalomania/histrionic personality disorder were sewn.

Whether this is the basis for decades of B projects is questionable. But it was a contributing factor. I tried to soften the edges and not be too obnoxious about it.

The incident did teach me that the way out of despair is creativity. The mind’s a blank anyway why not go for broke. Those moments can produce good work.

It’s a tactic I continue to employ today. There’s a hell of a comeback worked out in my head (that’s never going to happen).

The rage, vengeance and helplessness of that episode have stayed with me all of my life. And it really did, it happened just this way.

One thought on “Mrs. Taylor Sure Seems to Use A Lot of Ice”