It’s always comforting to remember the bedtime stories we were told as children. I can still hear my Grandmother’s voice recounting the tale of Lorenzo Ghiberti and his Sacrifice of Abraham panels.  His Bapistry doors design beat out the favored Brunalesschi to win the building commission for the Duomo in Florence.

The petulant Bruno finished the cathedral in the end. After years of sabotaging and undermining Renzo’s work, it turned out only he knew how to build support for such a massive brick dome in the first place.

I’m not sure exactly where Grandmother was going with the story but by now it should be obvious that I never begin any project without thinking in extremes. It is part of my personal liberation so I consider it no vice.

Readers will remember previous disastrous results in pursuing My Rights to Privacy (Film). Although originally thought to be a cheap way of doing something innovative, at $15 a pop it mounts up after a half dozen attempts to get it right. Not to mention the expense of all the failed trims and moldings that were tried.

I feel partially to blame for those early fiascos because I failed to read the instructions until the fifth try. Dampening the cheap plastic really does help with air bubbleage and placement

I was going for Islamic form and color on the front door. My man Sol in Cyprus did the neon yellow lion silhouettes that evoke a Mesopotamian feel. The blue and orange may be mistaken as a sports tribute to the Florida Gators or, god forbid, da’ Bears. It’s not. My aspirations were more spiritual.

Rather than the Gates of Paradise, my door better resembles those of Ishtar. (The ones in Berlin not the movie.) Coupled with the Crocodile Rock bathroom portal, it’s a little Blue Bayou Babylon.

A place Bathsheba could call home.

No golden crocodiles were killed in the production of this door.

Ellen introduced me to the thrill of bondage in the early ’80s. She was the firm’s Chief Librarian who schooled me on book mending technique. That experience inspired my recent use of cloth tape as a way to achieve color without breaking the “no painting” lease.

If God is in the details think how difficult it is for atheists to complete a project like this. 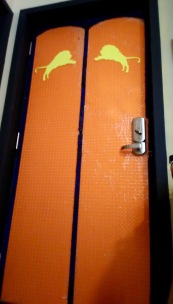 Bright orange clearly marks the nearest exit for those who want to get out of here in a hurry. 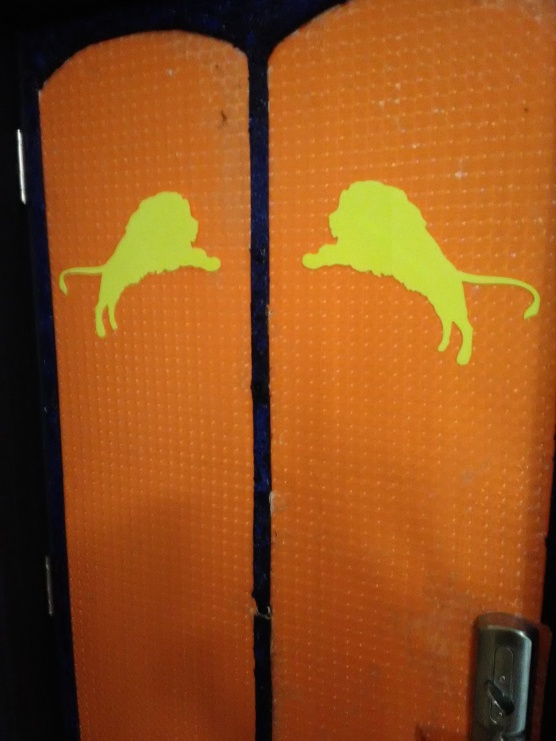 The bedroom door revisited. Turning a $15 job into one that cost a couple hundred.

One thought on “God Said to Abraham Kill Me a Son, Abe Said Man You Must Be Putting Me On”