Brian was a co-owner of Hot Stuff on Polk Street, a vintage clothing store. He was also an aspiring women’s designer.

In the Fall of 1979 someone came into the store to post a flyer for the Outrageous Beauty Contest to be held at the Fab Mab. Brian loved money more than anything and immediately set his eyes on the prize. That’s when our mutual friend Kathy told him to call me.

For ten days straight we got together evenings to hash out our routines. The night before the competition we met with the producer/director to preview our outfits and skits.

The guy lived in a Berkeley, commune-like setting and looked like Stephen Hawking. He was in a wheel chair and communicated with a pointer attached to his forehead he used with a letter board on his tray. His acolytes were so attuned to what he wanted, they usually knew what he meant after just a few letters.

The women he lived with were absolutely devoted to him and there was a heavy sexual vibe to it all. Some worked in the strip clubs on Broadway next to the Fab Mab. Most of the other entrants in the beauty contest worked in those clubs too. Brian and I were the only men competing..

I don’t remember all the areas of competition but one involved Brian doing a Julia Child impression assembling ingredients and preparing a sauce. He finally called for his assistant and I appeared layered in spaghetti. I was supposed to be completely covered in the pasta but in our haste to assemble it backstage it wouldn’t all stick.  The crowd loved it anyway, especially when Julia dumped the Putanesca all over me.

In another segment we appeared in Brian’s original designs made from Hefty trash bags. I played the Hallelujah Chorus on a little toy piano while wearing a Bishop’s mitre. He improvised singing God knows what.

For the finale we used nasty tripe from Safeway that had been doctored with food coloring to look like brain matter. We attached it to his forehead then he laid on a catafalque as JFK. I appeared as Jackie in the pink suit and recited poignant passages from the Inaugural Address. We won the contest and our triumph was documented in the Examiner.

We had so much fun working together I was a little surprised in the days immediately following when he became distant. He wasn’t rude about it, he just wasn’t sentimental. He was ready to move on to the next money-making opportunity, whatever that might be.

I wasn’t about to let him get away with that shit. I forced myself on him and within a couple of weeks we were inseparable. We remained close friends until he died in 1991.

Ready for the putanesca, Mr. DeMille

Our natural states: Brian in tightie whities, me sipping a ‘tail.

Brian handled the spin with the press afterwards. Which accounts for me being mentioned only as “partner.” 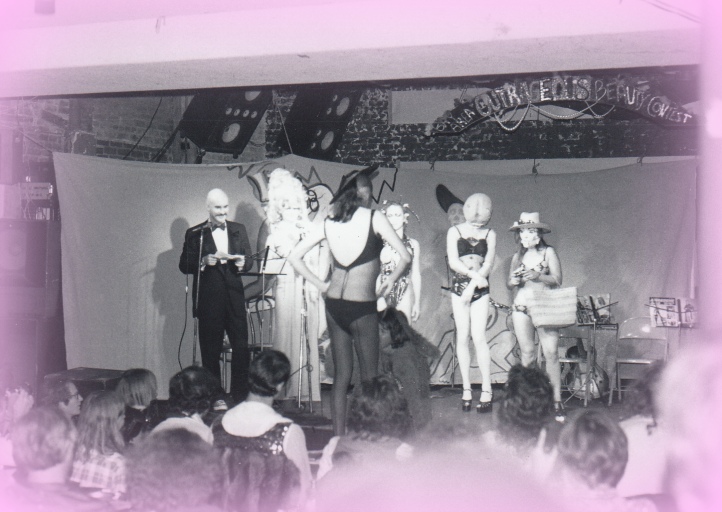 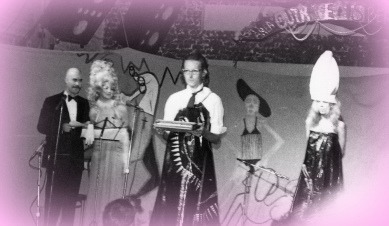 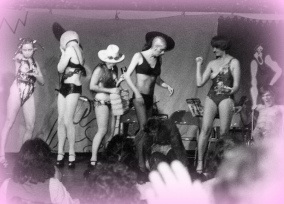 It always feels good to be the skinniest. 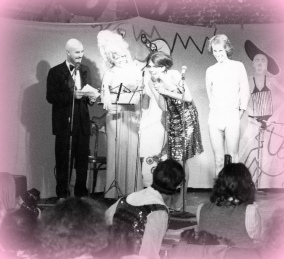 My plea for world peace 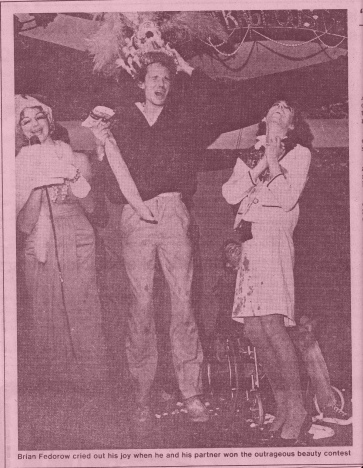 Brian couldn’t contain himself. I could.

5 thoughts on “Life of Outrage, Life of Beauty”